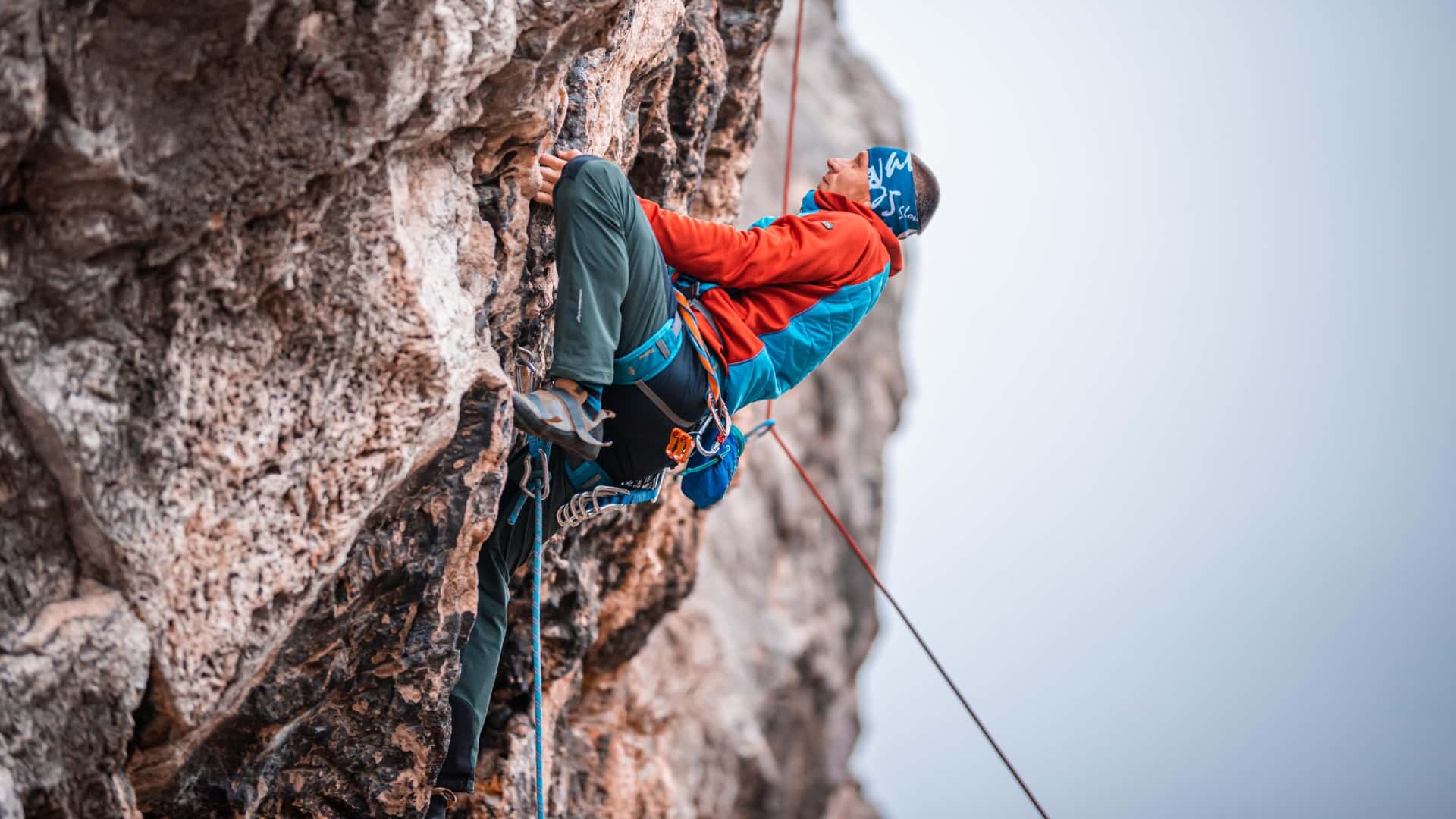 Knowing how to climb can unlock a whole new way to move through the mountains. Climbing is also great exercise that you can do throughout the year if there’s a climbing gym in your area.

Climbing as a sport has evolved rapidly in recent years, which has led to the formation of different specialties. Two of the most popular types of rock climbing are roped rock climbing and bouldering, which doesn’t require ropes.

In this guide, I’ll explain the similarities and differences between bouldering vs rock climbing and help you decide which type of climbing to try.

What is Rock Climbing?

Rock climbing is a broad sport that involves any type of climbing on rocks. For the purposes of this article, I’ll focus specifically on roped rock climbing, also known as technical climbing.

Rock climbs can be 50 feet tall or thousands of feet tall. The longest standard rope length is 70 meters, or about 230 feet, so this is a common length for climbs.

Free climbing is the type of rock climbing most people think of when they think of climbing. However, there are different types of climbing within this category:

The purpose of the rope is to protect you in case you fall. How far you’ll fall depends on the climbing route and your gear, but you typically won’t drop more than 10 feet and shouldn’t hit the ground.

Bouldering is a rock climbing discipline that doesn’t involve ropes. Usually, bouldering routes are no more than 15-20 feet in height.

If you fall when bouldering, there’s nothing holding you to the wall and you’ll land on the ground. The fall is short enough that most climbers don’t get hurt as long as they land on a soft surface like a bouldering crash pad.

The most obvious difference between rock climbing and bouldering is that rock climbing requires a rope, while bouldering doesn’t. This seemingly simple distinction leads to very different styles of climbing.

Scaling a rock climbing route that’s hundreds of feet tall requires a mixture of strength, technique, and endurance. Some routes are relatively easy with a few tricky spots, known as a crux. Others have more sustained difficulty, requiring rock climbers to manage the burn in their arms and legs as they climb for an extended period.

Bouldering problems are short, but tricky. They require problem-solving skills to figure out how to get from one set of holds to another. They also require a lot of strength, and particularly the ability to make explosive and dynamic moves. Endurance matters, but not nearly as much as for long rock climbing routes.

One of the major advantages of trying bouldering when you first get into climbing is that it doesn’t require a lot of special equipment. You just need climbing shoes, chalk, and a crash pad to fall onto. Even if you buy all new equipment, you can start bouldering safely for less than $200.

Roped rock climbing, on the other hand, can require a major investment in climbing gear. Ideally, you have a friend who already has a lot of the required gear and is willing to mentor you. In that case, you can get started with a pair of shoes, chalk, a climbing harness, a belay device, and a helmet. All of that will set you back about $350.

On top of that, you’ll need to spend some time learning basic rope skills. At a minimum, you need to know how to belay a climbing partner safely. You should also learn how to clean gear from a route and how to safely rappel off of a route after climbing it.

If you want to have all the safety equipment needed to lead a day at your favorite rock wall, expect to spend at least $750 and potentially much more. In addition to the items above, you’ll need a climbing rope, lots of carabiners, and pieces of gear to protect a fall.

My suggestion if you’re new to either bouldering or rock climbing is to borrow as many items as you can. Buy a pair of shoes and a chalk bag, but ask friends if you can borrow a crash pad, harness, helmet, belay device, and rope. That way, you can try out climbing without spending a lot of money and decide if it’s something you want to do more of.

When done correctly and conservatively, bouldering and rock climbing should both be very safe.

However, accidents can and do happen from time to time. As you might expect, the consequences are potentially much worse if you’re hundreds of feet in the air as opposed to only 15. In that sense, rock climbing is more dangerous than bouldering.

Bouldering isn’t without chances for injury, though. Even if you fall onto a soft crash pad, you can roll your ankle or land funny and break a collarbone.

You’re less likely to face these types of minor injuries when roped climbing since you shouldn’t hit the ground. However, there are times when you can swing on a rope, and scraping up against a rock wall isn’t very pleasant.

Another thing to consider is that roped rock climbing requires at least two people. While one is climbing, the other is belaying them to manage the amount of slack rope in the system. Bouldering can be done solo, which is an advantage if you want to be able to go out without having to plan around other climbers’ schedules.

Bouldering and rock climbing use completely different grading systems to rate the difficulty of a problem or route.

Bouldering problems are rated using the V scale, which starts at V1 and goes up from there. The higher the number next to the V, the more difficult the problem.

While the scales seem similar, there’s no rule of thumb for converting between them. Rock climbing routes and bouldering problems are simply too different in style. Remember that every rating is subjective, so one 5.5 climb or V3 problem might feel easier or harder than another.

Where to Go Bouldering and Rock Climbing

You can go bouldering or rock climbing both outdoors and indoors.

Areas for outdoor climbing have typically been developed with established climbing routes or bouldering problems. Some places have both bouldering and climbing, but most offer one or the other. It’s often not obvious where the routes are or how difficult they are, so make sure you get a climbing guidebook for the area you want to climb.

Climbing gyms are a great option if you live somewhere where the weather doesn’t allow year-round climbing. They can also be a great place to meet fellow climbers and improve your climbing skills.

Is Bouldering or Rock Climbing Right for You?

Bouldering and rock climbing are both terrific ways to try climbing. Many climbers choose to do both.

The advantages of bouldering are that it doesn’t require a lot of gear and you can go on your own without having to coordinate with a partner. You also don’t have to learn any rope skills. Bouldering emphasizes problem-solving and explosive strength, while putting less emphasis on endurance.

The advantages of roped climbing are that it allows you to scale rock walls that are hundreds of feet high and that you’re less likely to be injured from an awkward fall. Roped climbing requires strength, but it’s also a test of endurance. You’ll need a climbing partner, basic rope skills, and a fair amount of climbing gear to get started with roped climbing.

When choosing between bouldering and rock climbing, think about what climbing opportunities are available in your area and what your goals are for climbing.