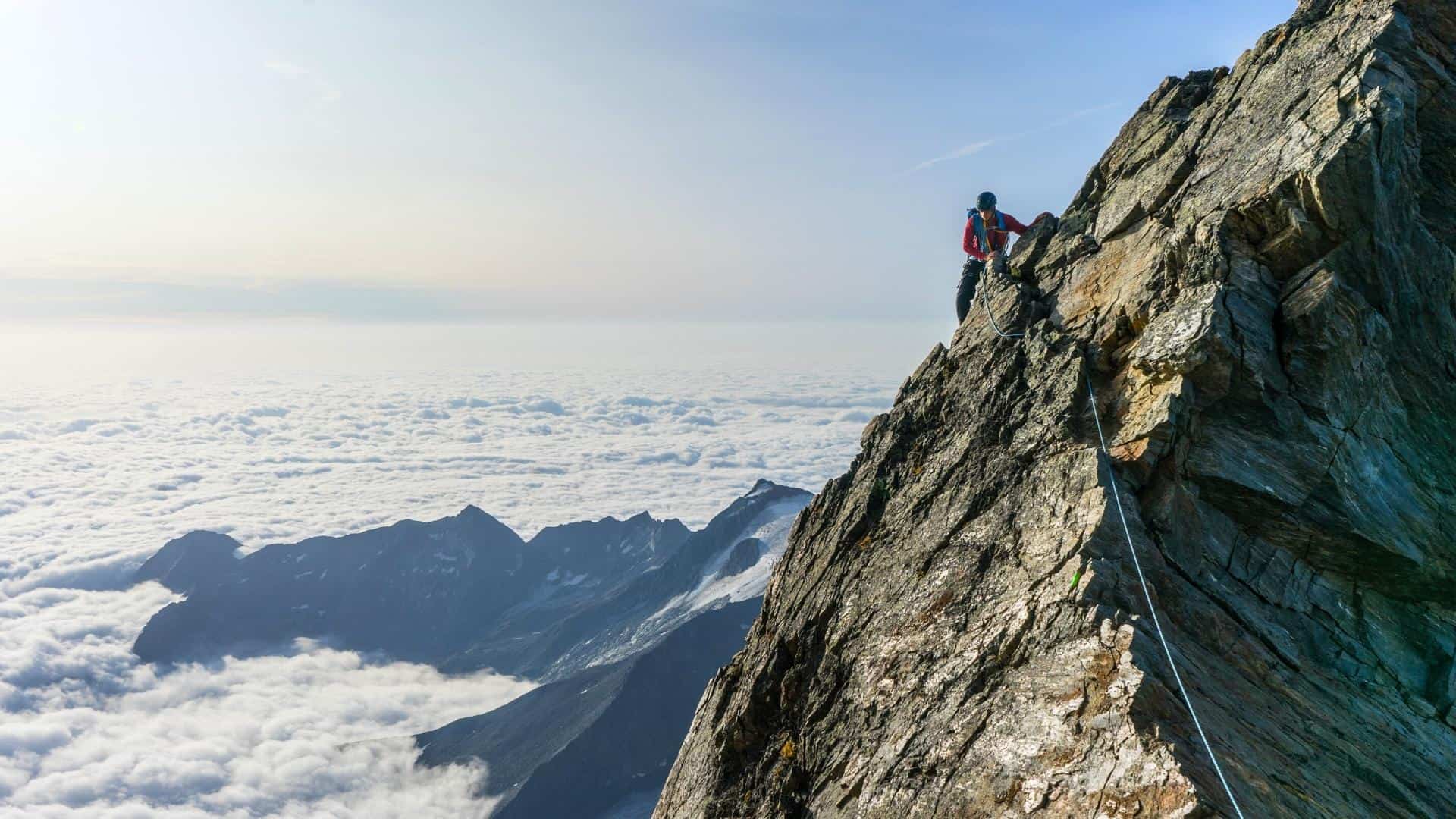 The Essential Rappelling Gear For Mountaineering

On technical alpine routes, rappelling is an essential skill. While it doesn’t require much gear and isn’t hard to master, rappelling is responsible for a disproportionate number of climbing accidents, including deaths. So, it’s critical to make sure you have the right gear for the job and that you’re comfortable setting up a rappel in the mountains.

In this guide, I’ll cover the essential gear you need to carry in order to rappel safely while mountaineering.

Rappelling is a technique for descending technical climbing and mountaineering routes using a climbing rope. When rappelling, the rope is fixed to a point and you use a friction device to lower yourself safely down the rope.

Most rappels in the mountains are double-strand rappels. You need to build an anchor or rappel station and then double the rope over through the anchor. This should leave you with two equal-length strands hanging over your planned descent route. When you’re finished rappelling, you can pull the rope through the anchor to get it down to where you now stand.

Note that when you perform a double-strand rappel, you can only rappel half the total length of your rope since it is doubled-over through the anchor.

You can rappel on a single strand, which involves tying off one end of the rope to an anchor and then rappelling on the entire length of the rope. This doubles the amount of distance you can rappel, but there’s no easy way to release your rope from the anchor.

Rappelling and abseiling are the same thing. The word “rappelling” is French in origin and is the term that most US and Canadian climbers use to describe this descending technique. The word “abseiling” is German in origin and is often used by British mountaineers.

In order to rappel safely, there are a few essential pieces of gear you’ll need. I’ll explain what should be in your basic rappelling equipment kit and why you need these items.

A climbing rope is the most important piece of gear you need to rappel. After all, it’s the thing that you’ll be rappelling on.

Rappelling ropes can be either dynamic or static. Most mountaineers use dynamic ropes because you can also climb on them. If you bring a static rope, it can only be used for rappelling or hauling gear, not for lead climbing. Opinions differ on whether a static rope is safe for glacier travel, but in most situations in the mountains it makes sense to err on the side of caution and bring a dynamic rope.

The length of your rope is very important when you plan on rappelling. You can only rappel half the length of your rope, so a 60-meter rope will only allow you to descend around 30 meters (100 feet) at a time. On popular climbing routes, pre-made anchor stations are typically spaced for 60-meter ropes, but be sure to check what rope length you need if you plan on using established rap stations.

If you have a long way to descend via rappel, it might make sense to bring two ropes so you can descend further with each rappel. This can also be useful if you want to bring two 30-meter ropes for a climb to make two rope teams instead of a single 60-meter rope. Make sure when performing a double rope rappel that the two ropes are the same length and roughly the same diameter.

While you might find existing rappel stations on popular mountaineering routes, you should also be prepared to build your own rappel anchor.

What you’ll need to build an anchor depends on the terrain. I’d recommend bringing at least two double-length slings and a cordelette that’s at least 10 feet long. You can wrap the slings or cordelette around boulders or stable rock features to build an anchor. In steep terrain where there are no boulders to sling, you may have to build a rappel anchor out of nuts or cams. However, this is very uncommon on popular mountaineering routes.

If you plan to build an anchor in the snow, you’ll need to bring a picket to leave behind. Pickets are designed to be buried in the snow, but they must be packed down very well in order to hold a climber’s weight. Make sure to bring a single-length sling to girth-hitch, or wrap through, the picket, as this is what you’ll attach a carabiner to.

Stay attentive when building an anchor and be sure to test any natural features you plan to incorporate into your anchor. When in doubt, set up a backup for your anchor using cams, nuts, or a second picket. The last climber to rappel can remove this backup after the other climbers have rapped on the primary anchor and demonstrated that it can be trusted.

Once an anchor is built, all climbers in your party should attach themselves to it using a personal anchor tether. This can be a dedicated personal anchor system (PAS) or a sling.

Your rappel device is the friction device that you use to hold yourself to the rope and lower yourself down it at a controlled rate. Most mountaineers use an ATC or belay device as a rappel device, as these can also be used to belay while climbing.

Importantly, you need to consider the diameter of the rope you’ll be rappelling on when choosing your rappel device. If you’re bringing a very skinny rope, you need a rappel device that’s rated to bite into a rope with that diameter. Popular rappelling devices like the Black Diamond Guide ATC are only rated to bite into ropes that are 8.1mm in diameter or larger and may not work on many static ropes or half ropes.

It’s also worth noting that you can use a prusik or another friction knot to rappel in a pinch. However, this should only be used if you lose your primary rappel device, as it’s very difficult to control the speed at which you lower yourself.

While not technically required, it’s good practice to back up your rappels with a prusik or klemheist knot. These backup knots go around the rope and clip to your harness leg loop, and they will lock the rope in place if you lose control of it and start sliding. You can use a piece of cord, a sling, an autoblock, or a hollow block to make a prusik or klemheist.

You should have at least three locking carabiners available when rappelling, and ideally four or more.

You’ll need either a locking carabiner or a rappel ring to run the rope through. Never run the rope directly through a sling or other non-metal material, as rubbing while you rappel can fray the rope’s sheath and cause it to fail.

A climbing harness is required to rappel safely. It keeps your rappel device attached to your body and prevents you from flipping over while rappelling along overhanging rock faces. There are plenty of ultralight harnesses available for mountaineering and alpine climbing.

Always wear a climbing helmet when rappelling. As you’re rappelling, the rope and climbers above you can dislodge rocks, and you have very little latitude to get out of the way when you’re mid-rappel.

It can be nice to have a pair of rappel gloves or another pair of grippy leather gloves while rappelling, especially if you’re performing multiple rappels in a row. If you’ve ever experienced rope burns on your hands, you know exactly how painful rappelling without gloves can be.

Always bring extra slings, cordelette, and locking carabiners when rappelling on a committing or unknown route. If you have to build your own anchor, you will leave at least one sling and one locking carabiner behind. If you have to build another anchor lower down the mountain, you’re going to need more gear to build it. Err on the side of bringing too much rather than risk getting stuck in a difficult situation.

A prusik knot should always be used to back up your rappel, and can be used in lieu of a rappel device if you have no other option.

When making a prusik, the diameter of the cord you use matters. It should be about two-thirds the diameter of your rope. So, if you’re rappelling on an 8mm rope, use 5mm cord to make your prusik. (There’s a fair amount of leeway here. As long as the prusik bites the rope when you yank on it, it’s suitable.)

Rappelling while mountaineering is an essential skill and it’s important to make sure you have the right gear with you to rappel safely. Always bring more gear than you think you strictly need, as you may need to leave gear behind when rappelling in areas that don’t have pre-existing rappel stations. Also be sure to practice rappelling in a safe area to ensure that you know how to build an anchor and how to rappel safely.