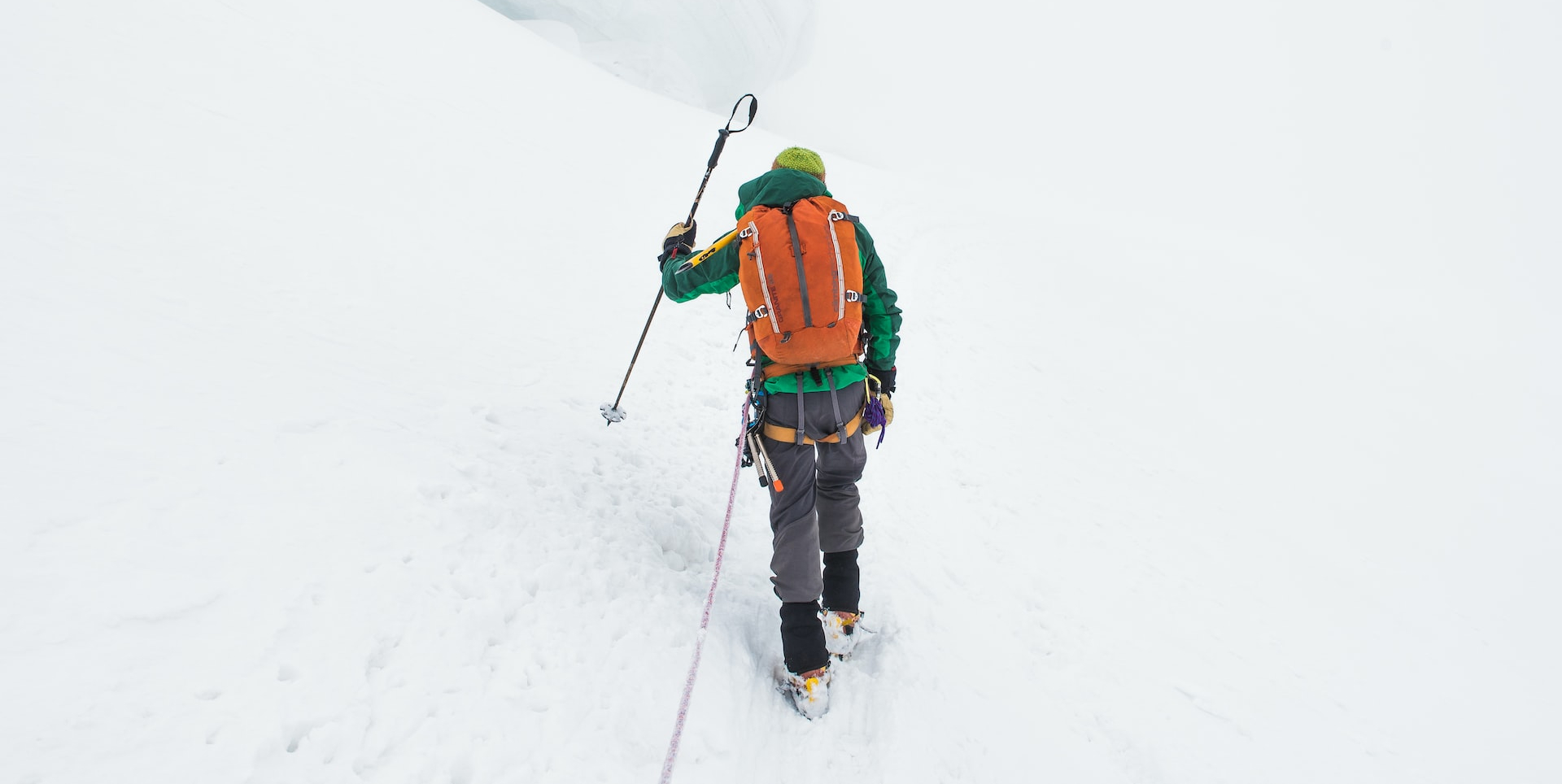 Snow Climbing: How to Get Comfortable On Steep Snow

Getting comfortable on steep snow slopes is one of the most critical skills mountaineers can learn. Climbs on Mt. Rainier, Denali, and smaller mountains throughout the continental US all require sections of steep snow climbing.

Techniques for snow climbing are relatively basic, but it’s important to have them down pat. A lot of the challenge of climbing snow is mental. The more time you spend on snow, the more comfortable it becomes.

In this guide, I’ll explain the techniques for ascending and descending on snow, how to self-belay with an ice axe, and how to rope up when the snow gets steep.

Why are Snow Climbing Skills Important?

Unless you wait to do all of your mountaineering in August, you’re almost certainly going to run into sections of steep snow while climbing. Most big mountains in the continental US are snow-covered until July, and glaciated peaks like Mt. Rainier and Mt. Baker can hold snow late into the summer.

In fact, the traditional spring mountaineering season (May and June) is timed to take advantage of this snow coverage. Many climbing routes are simpler when they’re snow-covered since the underlying rock may be loose or technical.

Snow climbing is of course essential for ski mountaineering, but it’s also one of the basic skills that every backcountry skier and boarder should have. It’s not uncommon to have to boot up to the top of a slope that you want to ski.

Being well-practiced in snow climbing is key to staying safe. Snow slopes, even low-angle ones, can be more dangerous than they appear. If you start sliding on snow, you’ll pick up speed surprisingly quickly.

While some snow slopes have safe runouts—like a flat, open area at the bottom—others can dump you into rocks, trees, or even cliffs. It’s critical that you know how to prevent snow travel accidents with good footwork and self-belay techniques, and how to self-arrest quickly if you do fall.

There are a few different step techniques for climbing up steep snow slopes, but they’re all variations on the same basic idea. You want to kick into the snow to create a platform for your boot (in soft snow) or to engage the front points of your crampons (in firm or frozen snow).

Step kicking is the technique you’ll use 90% of the time when climbing snow. Kick each foot straight into the snow and then push down to compress the snow into a platform.

In firm snow, you may have to kick several times to make a good step. If you’re breaking trail for partners behind you, making better steps will help save them energy so they’ll be fresh when they take over.

If you need to traverse while climbing snow, you can use crossover steps. Cross your trailing foot in front of your leading leg, then step into the snow. Then bring your leading leg around to step up and in the direction you’re trying to go.

This technique only works well on soft snow since you can’t kick all that effectively when crossing over. It will also leave you out of balance every other step. Only move your ice axe when you are in balance (your legs are not crossed).

If you’re traversing directly across steep snow slopes, crossover steps aren’t going to get you where you need to go.

Instead, face into the slope and use your trailing foot to kick a step as close as you can to your leading leg, about shin height. Then stand on that foot while you reach out your leading leg to kick a new step in the direction you want to traverse.

This approach will still lead you uphill, so you can compensate by kicking downward with either your leading or trailing foot every few steps.

Techniques for Descending In Snow

Descending snow can be a lot of fun or extremely challenging depending on the slope angle.

On very steep or firm snow slopes, the safest way to descend is by downclimbing. You’ll use the same techniques as for ascending, except stepping down instead of up each time. If you’re descending the same route you climbed up, you can even step in the boot track you’ve already kicked in.

If you’re setting a new descent track, it’s a good idea to take small steps and kick down a solid platform. A blow-out in the snow when downclimbing can easily cause a fall, so it’s important not to get out of balance by trying to reach too far down with your kicks.

On moderate snow slopes, plunge stepping is an extremely efficient way to lose elevation. Just walk downhill, with the only modification being that you want to put your weight over your downhill foot as you step. This ensures that your mountaineering boots drive into the snow instead of hitting a crust and sliding.

Plunge stepping is all about confidence. The firmer the snow, the more you need to commit to putting your weight over your downhill foot and stepping into it. If you’re tentative with your plunge step, you’re more likely to slip.

Of course, slides do happen when plunge stepping, especially if there are icy patches in the snow. You should only use this technique on snow slopes with a safe runout. Be ready to self-arrest at all times.

Glissading and boot skiing are fun and fast ways to get down lower-angle, softer snow slopes. These techniques usually work best in mid-afternoon in early summer, when the snow surface has had a chance to warm up and get a little mushy.

When glissading, you sit down on the snow and slide downhill on your butt. Keep your legs out in front of you and use your ice axe as a rudder. If you pick up too much speed, you should be able to roll onto your ice axe and engage the self-arrest position quickly.

Boot skiing is exactly what it sounds like. Get a running start and slide your way down on both feet while standing upright. Boot skiing is pretty uncontrolled and you’re not in a great position to self-arrest. You should only do this on safe, low-angle slopes and be ready to laugh if you fall face-first into the snow.

Most of the time, it doesn’t make sense to rope up on moderate snow slopes. It takes a lot of extra time to rope up and set up snow protection, and snow conditions can change rapidly in the spring so time matters. Without adequate protection in place, it’s nearly impossible for one partner to stop another’s fall if they’re sliding quickly on snow.

So, you have to be able to self-belay on snow using your ice axe. There are three ways to use your axe while climbing snow.

On very steep slopes or in firm snow, it may be helpful to use two ice axes or one axe and one ice climbing tool in the high dagger position. For ski mountaineering, carrying a whippet pole is great for this purpose.

You can also use a ski pole flipped upside down as a makeshift second tool in soft snow. However, in my experience, the pole gets in the way more than it helps.

Roping up for snow climbing is usually limited to very steep (>50 degree) slopes with dangerous runout below. Roped snow climbs should only be taken on by advanced climbers with plenty of experience climbing steep snow.

The best way to protect roped snow climbs is by using pickets. These are typically long pieces of aluminum that are designed to catch a lot of snow and have holes where you can clip a carabiner to connect your rope.

In all but the firmest snow conditions, you should fully deadman your pickets. Use the adze of your axe to dig a snow trench and lay your picket in horizontally. Connect a draw to the picket, then stomp snow on top of the picket. It’s a good idea to pull downhill on the draw to make sure the picket is solidly in place.

You can place a picket vertically in very firm snow. You should have to work hard to bang it into the snow using the head of your ice axe (not the adze). If it goes in easily, it’s not going to hold a fall.

There should always be at least one picket between climbers. Two is a good idea in challenging snow. Snow protection is not like rock protection—it can blow out during a fall. When climbing snow on a rope team, it’s still essential to use proper footwork techniques and to self-belay to prevent a fall.

Working on Your Mental Game

The more time you spend practicing snow climbing techniques, the easier it becomes. A lot of the challenge around snow climbing is mental. The more confident you are, the better your steps will be and the better you can deal with unexpected slips and blow-outs in the snow.

A good way to practice snow climbing is to find a slope that gradually gets steeper as you go up. The slope should have a very safe runout with no rocks or trees to worry about. You can practice kicking steps, using different ice axe positions, and self-arresting at different points on the slope.

Snow climbing is a fundamental skill that every mountaineer should master. Being comfortable and confident on snow will allow you to take on a wider range of climbs and move efficiently through challenging alpine terrain.